The happy plant that escaped to Africa

Nestled on the west coast of Africa, a plant lives 3000 km from its 3000 relatives. Most bromeliads are relatively similar in shape but take on a wide variety of habitats in the neotropics. Except one. Meet Pitcairnia feliciana. 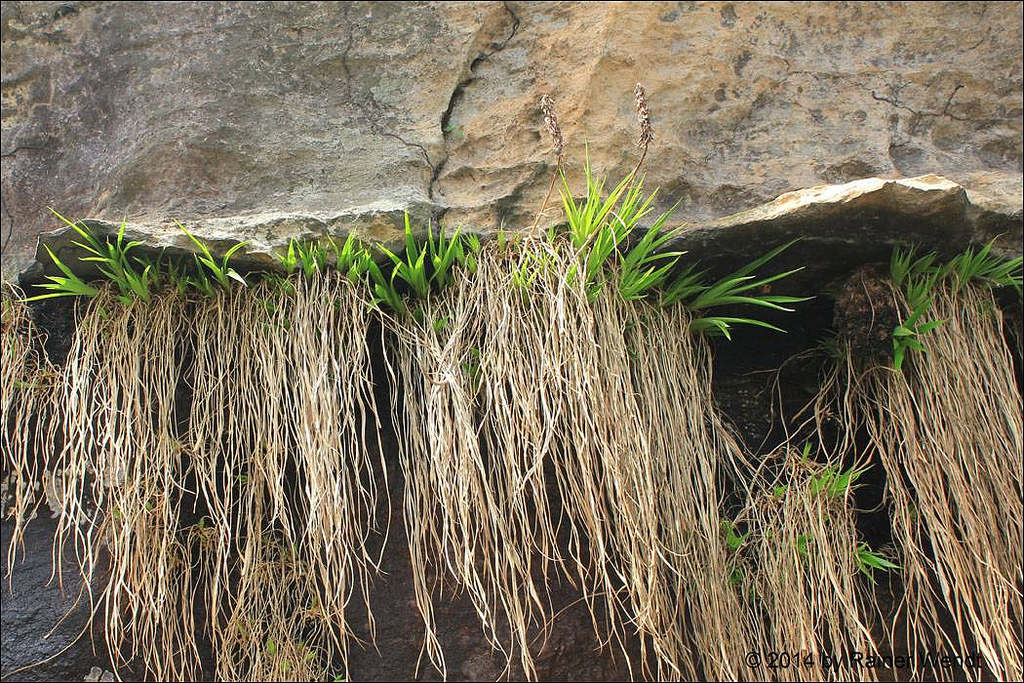 Sure, these days we see pineapples (the most famous bromeliad) cultivated around the world; but outside of the Americas, they are introduced species. Yes, many of us may have bromeliads in our homes or have seen them in waiting rooms; again, these have been marched across the planet through the horticultural trade. P. feliciana is the only known species in the family, out of three thousand, to naturally occur in the old world.

Pitcairnia feliciana – which I like to think of as the Happy Pitcairn – is native to Guinea, in West Africa. It shares the morphology other Pitcairnia bromeliads: long floppy-looking, strap-like leaves, arranged in a rosette pattern at the base of the plant. Unlike many of its relatives that populate the canopies of neotropical  rainforests, P. feliciana is a lithophyte, anchoring itself between cracks in rocks. 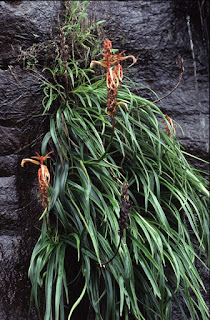 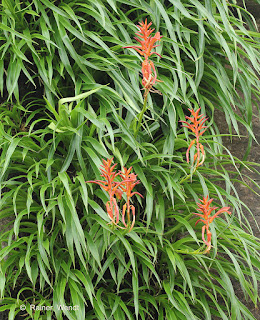 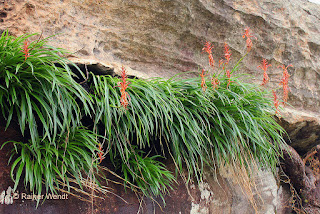 Bromeliads are thought to have arisen in northeastern South America around 100 million years ago. South America and Africa were much closer to each other back then, however it doesn't look like any bromeliads crossed the Atlantic at that time. To begin with, the Pitcairnia genus seems to have originated in the Andes 15 million years ago and spread around the continent from there. By that time, the Atlantic was nearly as wide as it is today, even in spite of a drop in sea level at the Brazilian coast 15-10 million years ago while sea levels elsewhere reached rose. Instead, the lineage from which P. feliciana sprouted dispersed to West Africa 9.3 million years ago.

Pitcairn bromeliads are especially drought-tolerant and do well in poor soils. Therefore, it is thought that the plants might have rafted some of the way across the Atlantic.

Of course, today there are incredible transatlantic voyagers like sharks and whales and turtles – but as astounding as that is, they are big, strong marine animals. We're talking about a little terrestrial plant, accidentally and passively crossing the second largest ocean on the planets. It seems extraordinary to think, but bromeliads are not the only plants to have defied the challenge the Atlantic Ocean provides to dispersal. Members of the daisy family, Asteraceae, are thought to have spread from South America to Africa 50 million years ago, although the continents would have been a little closer to each other at that point.

An impressive feat nonetheless. Although whenever I describe bromeliads as a "neotropical family of plants", I feel guilty trying not to imagine the lonely P. feliciana clinging to a rock face in Guinea.

Image 1.1 - Tapir-themed jungle cake The 27th of July is world tapir day. Last year I became aware of this event through a tapir-obsessed friend of mine, Michael Natt (who's birthday it also happens to be – hippy barfday !). Now that I am living in a place tapirs are native to, I thought it would be appropriate to celebrate this day here at the Timburi Cocha research station with a tapir-themed jungle cake ( Image 1.1 ) and to dedicate these bizarre mammals a blogpost. Image 1.2 - Quick world tapir card to celebrate the occasion. © X O'Reilly
Read more

· 00:20 GMT-5, 2nd July 2012 -  Arrived in Ecuador's capital, Quito, when the airport was still smack bang in the middle of the city. · 18:55 GMT-5, 22nd July 2013 -  Watched the sparkling night lights that sprawl over Quito's mountainous façade shrink beneath the plane that took me from the equator. In an attempt to summarise the uncompressable and spare you my rambling, I've selected five photos from each of the months I spent in Ecuador on industrial placement. They're not necessarily the best photos nor personal favourites, but they all mean or represent something.
Read more

Anyone who knows me or has seen me walking in recent years will be aware that I have longterm problems with one of my hips. In February just gone, I went home to Spain and was met at Barcelona airport by my brother. On the drive to my parents' house, Calloway asked exactly what was wrong with my hip, which had been freshly replaced 2 months prior. I started with "Well, you know what they did to my hip when I was a baby, right?" "Not exactly, no..." he replied. A lot of people ask about my hip, so I decided to use the 6-month-versary of my shiny new titanium hip as an excuse for a completely self-indulgent post about what was wrong with my hip to begin with and why I needed a replacement two weeks into my 25th year (and an excuse to show off my scar and some x-rays, look away now if it embarrasses you to see x-rays of my pelvis).
Read more